Hello. We are no longer partnered with Jackson Lees Solicitors so the information below may be out of date. This page will be removed/replaced in due course. Please use the Solicitor Search box on the right to find an alternate firm in your area. Thank you.

As you may or may not know, Jackson Canter is now Jackson Lees solicitors. The addresses in Liverpool and Manchester are still the same. The contact details have changed. The legal issues they cover such as immigration, actions against the police, employment, family law, etc. has grown. The number of staff has doubled, with nearly 300 people employed by the firm at the time of writing.

So what happened? Jackson Canter purchased Lees Solicitors, a 126-year-old law firm also based in Merseyside. Lees Solicitors had offices in Birkenhead, Heswall and West Kirby and specialised in clinical negligence and Court of Protection cases. What happened to poor old 'Canter'? We don't know. But even though the firm has merged their main brand names together, the group have opted to keep the separate Broudie Jackson Canter (now Lees) name which acted on behalf of 20 families involved in the Hillsborough disaster - a case resulting in the country's longest ever jury proceedings which ended in 2016.

Executive chairman of the Group, Andrew Holroyd, provided this comment to the Manchester Evening News:

"The significant alignment and breadth of our services, together with a shared customer-centric culture, will enable us to ensure the highest levels of quality continue during this exciting period of expansion across the region."


They also seem to have dropped the Quality Solicitors affiliation. If you're not familiar with the QS branding, QualitySolicitors is a network of law firms who all have to offer the services promised across the group. When firms sign up, they generally switch their logo, design, and general branding efforts. None of that remains but people are still searching our system for the additional name tag.

Certainly the firm tries to stamp its individuality by using phrases such as "common sense legal solutions" and catchy ideals like "a law firm committed to doing what is right".

This slightly more 'modern' approach, meant that we were surprised to see Jackson Canter buy such an old, established, well-known firm like Lees. This was not the first such move for JC though. In 2011, they merged with another Liverpool firm, creating the largest criminal defence team on Merseyside. The criminal law firm RM Broudie became "RM Broudie Jackson & Canter - The Justice Partnership". Obviously, it is now called Broudie Jackson Lees.

The Jackson Lees Foundation is the firm's charitable arm to support disadvantaged groups within the local community. The firm's staff regularly take part in fundraising activities for the Foundation. These include Tough Mudder, 5km, 10km and marathon runs, cupcake sales, donation boxes and so on. Each year they re-evaluate which charities they are going to raise money for so don't be afraid to give them some ideas if you know of good ones. Certainly our own donations have been guided by recommendations in the past. The Group as a whole apparently donate two percent of profits to the foundation.

In our original article on the firm, we commented that we were not big fans of the testimonial page which contained too many boiler-plate sounding comments, such as:


"I have used QualitySolicitors Jackson Canter many times over the last few years and wouldn't hesitate in recommending them. From the receptionists to the solicitors, they are welcoming and understanding but at the same time very professional. I really don't know how I would have managed without them ..."


etc. etc. They were not all like that. Some did seem unsolicited:


"Dear Jo. Thank you for your time and care over this house sale. I have really appreciated your constant readiness to help ..."


Which certainly sounds a lot more genuine and spontaneous. However, there doesn't seem to be a testimonial page on the new site. Instead, they have a list of Accreditations & Awards. Of them all, we are glad to see the Solicitors for the Elderly accreditation, the Legal Aid Lawyer of the Year Award, and a Modern Claims Award for Outstanding Achievement. Individual awards for best Junior Lawyer, Customer Service, and so on are all great - but staff members come and go. The noted awards above indicate a general mindset of the firm. They are absolutely the type of awards any forward thinking law firm should be aiming for.

Anyway, you may think we're sounding a bit too positive (gushy?) about Jackson Lees. But with a number of large, well-established firms collapsing in recent years - it is a real testament to their planning, staff, and setup that they seem to be going from strength to strength rather than calling in the administrators.

Naturally, there have been changes to the online setup with the name change. When the firm was part of the Quality Solicitor brand, the typical QS address of www.qualitysolicitors.com/jacksoncanter redirected to www.jacksoncanter.co.uk, as did the www.jacksoncanter.com version. There was then separate sites for www.broudiejacksoncanter.co.uk (which now redirects to www.jacksonlees.co.uk/broudiejacksoncanter) and www.lees.co.uk (which now redirects to the main www.jacksonlees.co.uk site). As before, the www.jacksonlees.com version also redirects to the UK address. So, now everything seems to be accessible from that main website rather than spread out now. However, even though they've adopted the new standard of using a secure site address (https:// rather than just http:// meaning a little padlock or green light should flicker up in your browser) we still highly recommend bookmarking the site when you go to it today. The scams involving solicitors/clients involve some of the highest losses. Especially when it comes to properties.

General Notes: Usually if Legal Aid is possible we've mentioned it above, but you can always ask. We haven't looked in depth at their recruitment program so are unaware of any job vacancies available. For a career with Jackson Lees Solicitors it's best to visit the website (www.jacksonlees.co.uk), check opening hours, and find the correct phone/email contact details. Simply emailing a CV to reception looks lazy. Each law firm's Law Society and/or SRA number should be on their site, usually at the bottom of each page. 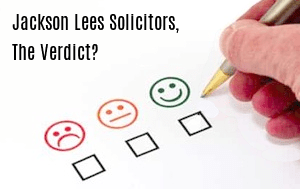 This Jackson Lees Solicitors article is rated
0.0 / 5 based on 0 reviews. †
(Voting has been suspended for this page.)
Found this article helpful? Rate it:
☆☆☆☆☆

Other Law Firms with Reviews like Jackson Lees Solicitors:

» www.morgancarter.co.uk - However ...
» www.dsluk.net - However ...
» www.ashworthmotoringlaw.co.uk - 'loopholes' ...
» www.taylorbracewell.co.uk - The name itself is quite straightforward with no real common spelling traps ...
» www.bromets.com - Many firms will post comments on their website that sound vague ...
» www.thompsons-scotland.co.uk - Certainly Thompsons provide a wide range of services ...
» www.lawlincs.co.uk - You'd have to be quite new to the internet to get to the end of that page without realising it was a contact form ...
» www.ktpsolicitors.com - For other case types ...
» www.qdoslegal.com - For Qdos ...
» www.bmd-law.uk - The function room has been badly affected by neglect and various leaks ...
» www.murrayhay.co.uk - They hand the project over to some web designers who come back with a design that they believe looks very business-like ...
» www.rogerssolicitors.ie - some had the exact same disclaimer pasted at the bottom ...
» www.rgsolicitors.co.uk - They also took part in Will Aid ...
» www.cbtrl.com - All of a sudden ...

Search for Solicitors Near You: 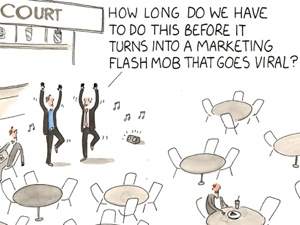